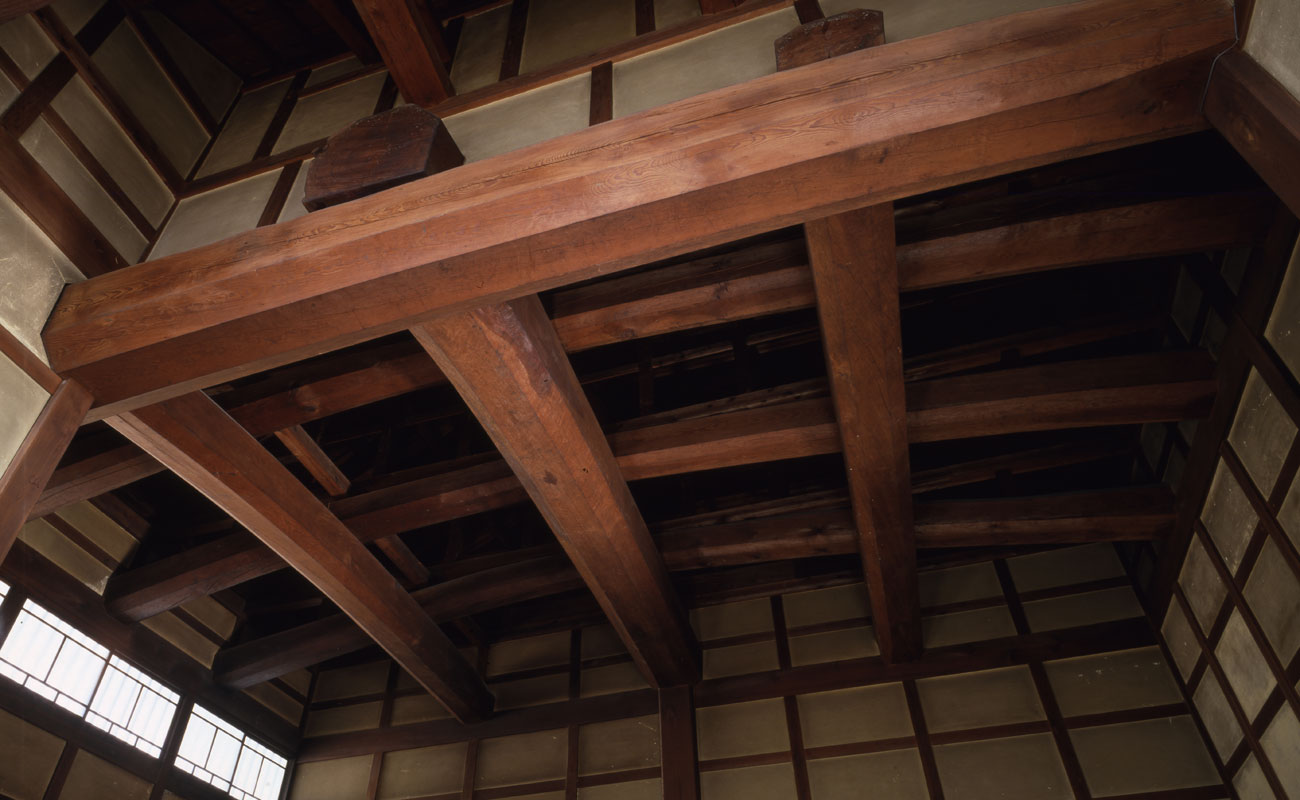 The Ishitani Family has been engaged in land-owning and forestry businesses on an extensive scale for generations. Mr. Denshiro Ishitani (1866 – 1923), who was a national politician during the period from 1895 to 1923, rebuilt his residence in Chizu into a large wooden one, which is currently known as the “Ishitani Residence”. The construction project started in 1919 and continued for about 10 years. Reportedly, the old main building used to be in the town house style facing the highway, but in the rebuilding project, it was reconstructed and set back from the road. Subsequently, the old residential buildings and storehouses, which have existed since the Edo Period, and the new main house were connected to each other by corridors, and an outer wall surrounding the grounds was built, emulating the samurai residence style. When you go through the front gate of this residence, on the right side beyond the front yard, you will see the formal vestibule with a low platform. Behind it there is a corridor covered with tatami mats, which leads to zashiki reception rooms and a teahouse. After going past the entrance hall, you will see the main building topped with a large roof in front. Inside is a large space of earthen floor (doma) with open ceiling and exposed giant beams, which is the traditional style for wealthy farmer houses. The room next to doma is the front desk referred to as mise. One of the rooms facing the garden in the main building is the master’s room in the shoin style. On the second floor, shinden (shrine) and zashiki rooms stand side by side. From every zashiki, the landscape garden with a pond can be viewed. This grand mansion with 40+ rooms and 7 storehouses in a 10,000 m2 premises stands with a backdrop of Suwa Shrine and a Japanese cedar forest. Its garden, namely the “Ishitani Garden”, of 1300 m2 was designated as a national scenic spot in 2008, and as a prefectural scenic spot in January 2010. In December 2009, the “Ishitani Residence” was designated as a National Important Cultural Property. The Ishitani Family keeps the historical architectural drawings and documents, which are acclaimed as precious materials not only for this house, but for how architectural technology changed from the early-modern age to the modern age.

History and Achievements of the Ishitani Family

When Chizu-shuku post town was appointed as a place where the first lord of the Tottori domain, Mitsunaka Ikeda, would stay during his Sankinkotai biennial travels to Edo, this town thrived. Town houses stood side by side and merchants from the town, surrounding villages, and even from other regions gathered here for trading. The Ishitani Family ran a salt wholesaler under their trade name Shioya in the Tottori castle town, and then moved to Chizu around 1691, residing in the center of Chizu-shuku town. At that time they established their base here, as well as their branch families, and prospered. The masters of the family succeeded the same set of three names, Denzaburo, Denkuro, and Denshiro, recurrently for every three generations. It was 1772 when Denzaburo was the master of Shioya that the family was appointed to serve as an Ojoya for the first time. The master of an Ojoya was a self-governing official representing farmers, and only a wealthy educated person with a high reputation could be chosen for it. Denzaburo served for 13 years and then Denkuro assumed the same position in 1813. In 1822, the role of Ojoya was handed over to their branch families and the Kokumai Family, and the Ishitani Family focused on their business as landowners and wholesalers in the post town. After the Meiji period (1868-1912) started, Denkuro flourished as a commercial capitalist. While supporting the local economy by promoting its industries, he devoted himself to the development of the town, proving himself a charitable man by contributing to aid projects, such as school construction and road improvement. At the turn of the 19th century, he was successful as a businessman in forestry and farmer financing, as well as a politician, as he was elected first as a member of the Lower House and then of the House of Peers. He also contributed to the completion of the Inbi Line at his own expense, which finally opened in 1923. Unfortunately, he passed away during his stay in Tokyo while his residence was being rebuilt. Thus the Ishitani Family played a great role in the rapid progress of the local area from the Edo Period through the modern ages.

Characteristics of the Ishitani Residence

The room beyond the entrance of the Main House is a huge 14m-heigh room with an open ceiling, whose giant pine beams create a magnificent atmosphere. The raised floor on the doma has a sunken fireplace. This doma served as a private entrance as well as a place where callers and the family exchanged information.

In the Edo Period, during his Sankin-Kotai travels to and from Edo, the feudal lord of Tottori, Lord Ikeda, stayed at the officially designated inn, while his accompanying high-ranking warriors stayed at the residence of the Ishitani family, whose master was a self-governing official. To show such a historically high status of the family, this formal vestibule was built following the samurai residence style.

An 8-tatami mat Parlor in the Shoin style with a tokonoma (alcove), a tokowaki (side-alcove) and an L-shaped nure-en (open veranda). This unique tokonoma without a post has a raised floor at the north and a low cupboard at the south. The design on the ranma (transom) of hirashoin (non-projecting study window) depicts the aerial view of the Ishitani Residence.

Shindate Zashiki was rebuilt from 1941 to 1943. In this shoin-styled room, the ceiling material is Kasugasugi cedar produced in Nara, the alcove post is made of Yakusugi cedar, and the back wall of the tokonoma is covered with washi paper. The view from this room of the chisen (pond) garden, built in the Edo Period, is magnificent.

This building was built in the Edo Period. The whole room is painted with soot, and for its frieze rails and toko-bashira (alcove post), round corner wood on which the bark remains at the corners is used. The ceiling battens are placed at right angles to the toknoma, which is uncommon and only seen in rooms built in and after the middle of Edo. The detailed work on each shoji window creates a beautiful shadow. With a backdrop of Mt. Ushibuse, the scenery of the garden, which changes with the seasons, is breathtaking.

One of two staircases to the second floor has Western spiral stairs with an arched bridge over its stairwell, which is an unusual feature. The beautiful grains of Shioji wood (Fraxinus platypoda) are impressive.

One room is installed with a large Shinto altar, which is worshiped by the Ishitani family as their family shrine. At the beginning of each year, they used to hang a copper pheasant on the right and mochibana (a tree branch decorated with colorful rice dumplings) on the left and put a toshioke (a wooden bucket containing New Year’s offerings for a Shinto god) on the altar and conduct Shinto ceremonies here.

Four Rooms Adjoining Each Other

While the north half of the 1st floor of the main building is occupied by the doma, the south half facing the garden consists of four rooms adjoined to each other to form the kanji “田”: the living room, master’s room, dining room, and storage room.

The master’s room is ranked the highest among the rooms in the 1st floor of the main house. It is a shoin-styled Japanese room with a chigaidana (staggered shelves)-installed tokonoma. There used to be a closed veranda on the left of the tokonoma , but later the partition was removed and the veranda has become a part of the master’s room.

By opening the fusuma (sliding screen), these two connected rooms could be used as one and was often the gathering place for the family. They were designed by Shoya Yoshida, who was leading the Mingei Movement, around in 1936 and were later remodeled.

Storehouse (Storehouse 1, 2 and 3 are open to the public)

There are seven storehouses, in which rice, miso, household utensils, furniture, clothes, forestry tools, charcoal, and more were stored. The Storehouse 1, whose framing was completed in 1920, used to store rice. Its floorboards are thick (about 3 cm thickness) and strong, and its pillars are densely arranged to ensure the wooden wall panels inside bear the weight of bags of rice. There used to be a kitchen wing between Storehouse 2 and 3, and in its place a work room and a restroom have been newly constructed.

*All times are rough estimates.